How ICA made strategic use of its 100-year anniversary 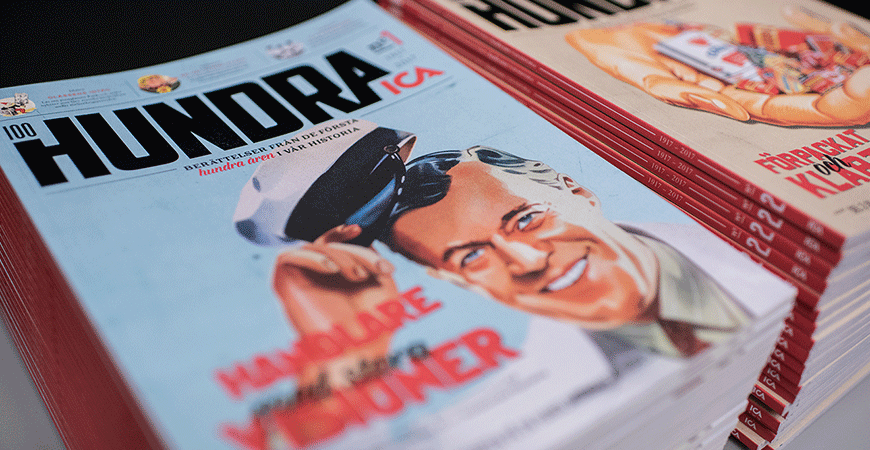 Show caption
Eventually, the historical project team made four issues of the ICAHUNDRED-magazine. They also gave the historical web site ica-historien.se a complete overhaul, adding fresh material from the magazine as well as its look.
By: Peder Edvinsson | 2019-02-15
share

In 2017, Swedish food retailer ICA turned 100 years old. Plans for how to incorporate the centennial into the business began almost four years before that. Now, ICA summarizes its centennial celebrations in a special anniversary magazine. Read an article from the magazine here – and download the full magazine as a pdf.

This article previously published in ICA’s anniversary maagzine “How we celebrated 100 years – and forward”. The magazine is available as pdf and also in web format at ica-historien.se (in Swedish).

Making strategic use of your history during a corporate anniversary

– ICA is an organization filled with history. They have worked actively with their authentic history during many years, regardless if they are celebrating an anniversary or not. But of course, when they turned 100, they turned up the activity level even further.

Anders Sjöman flips through the many publications about ICA’s 100-year history that was produced during 2017. He is head of communication at the Centre for Business History, where ICA keeps its historical material, and where many coworkers helped ICA during their centennial.

Making the most of an anniversary is a tricky thing. You don’t want the historical anecdotes to dominate that year’s corporate communication, while at the same time history should be the evident propeller to all you do today. Striking that balance is hard, or as ICA management put it when plans for the centennial were first drawn four years earlier: “We need an anniversary with meaning!”.

ICA’s answer to this was that it wasn’t as much a company that turned 100 years, as it was an idea. The idea of individual shop owners working together in a jointly-held central organizatio; or the ICA-idea. And this was summed up in the anniversary slogan “ICA 100 year – and forward”. (“ICA 100 år – och framåt”, in Swedish.) This slogan would encompass all activities, both historical and forward-looking through-out the year. (More about the thinking behind that approach is available in Swedish here.)

Mia Ravnborg was ICA’s project manager for all historical activities during the anniversary. She remembers the early discussions.

– At first, we talked about making an anniversary coffee table book. I guess everyone starts there. But we quickly realized we wanted do something that was more “us” and that could reach everyone in the organization, regardless if you worked in a store, an office or at a distribution center. So we decided to make an historical magazine. In four issues, says Mia.

The magazine ICAHUNDRA (or “ICAHUNDRED”) was produced by a project team at the Centre for Business History and built on material from ICA’s historical archives, which is kept at the Centre since 20 years.

– There is also ICA’s historical web site, ica-historien.se, which we first built for them in 2002. The site has editorial material, but above all a wealth of digitized images and pdf-scanned magazines from before. ICA’s open attitude to making its own authentic historical material available to the public is a joy to see and work with, says Anna Zeuthen, archivist at the Centre for Business History and the project’s main researcher.

“Your history is your stepping board into the future. The historical events you use should have a depeer meaning than just being interesting anecdotes.” – Anders Sjöman, Centre for Business History

At the same ltime it is easy to “drown in all the anecdotes” that make up a company’s past, says Anders Sjöman:

– Your history should be your stepping stone forward. The envents that you choose to use should have deeper meaning than just being engaging stories. Initially, we therefore spent a lot of time identifying the recurring themes that should permeate our stories from ICA’s past. And they should also be useful themes as ICA looked forward into the future.

In the end, five themes were identified: collaboration (about how individual shop owners organized themselves over 100 years), the store owner (whose role and work constantly evolves), food (both types and recipes), advertising (to show how customers have been addressed over time) and customers (focusing on informaition and sustainability issues) 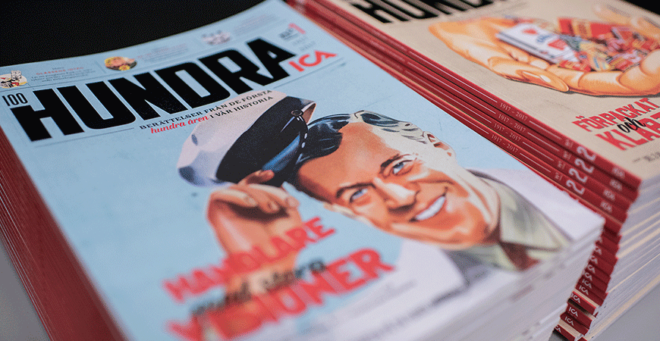 Eventually, the historical project team made four issues of the ICAHUNDRED-magazine. They also gave the historical web site ica-historien.se a complete overhaul, adding fresh material from the magazine as well as its look. 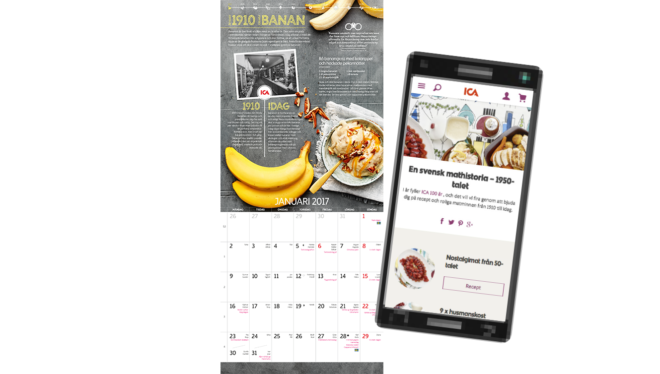 The annual ICA Calendar naturally had an historical theme in 2017.

All events from ICA’s history, which the history project team identified during its research, were then added to a time line, and marked with the theme (or themes) that it best signified. This history sheet, with verified and authentic events, then became the foundation for all storytelling activities during the year. No matter the storytelling format or reason, all stories originated with the history sheet.

In the end, the historical project team didn’t just make four issues of the ICAHUNDRED-magazine. It also gave the historical website ica-historien.se a complete design overhaul, adding in-depth content, in sync with the magazine articles.

The team also made a short film about ICA’s 100 years. The film opens with founder Hakon Swenson celebrating ICA on its anniversary. The recording, which was found in the ICA archive on a wax roll, came from ICA’s 25-year anniversary – and the words were as poignant now as 75 years earlier.

In addition, five shorts were made, highlighting the history of ICAs five geographical regions.

– One history, many ways to tell it. The history sheet was always the starting point. If we then created a narrative for one story form, we tried to find ways to reuse the material in another form, says Anders Sjöman.

ICA’s history even became a musical, with newly written songs for historical events in ICA’s history. It was first performed at the annual ICA Day 2017 and then repeated at the coworkers parties that were held at various places in the country. The show was produced by Anne-Christine ”Skrållan” Karlkvist and Robban Stopp, directed by Hans Marklund, choreographed by PM Andersson and Emilia Sandqvist and with stages created by Mats Arrhénborg. On stage were ad icons Monica & ICAnder, six actors, ten dancers, five musical show artists, a horse and carriage, a veteran truck – and 30-man marching band.

At all major ICA office across the country, a timeline was placed ona a suitable wall. At the headquarters in Solna, the same timeline, only smaller, was glued to the tables in the corporate restaurant.

Through-out 2017, ICA’s long history was also a main feature of all external customer communiation. The historical perspective was there in ads, direct mail and in-store displays. At ica.se, one of Sweden’s largest recipe sites, a subsection of the site was dedicated to historical food, where today’s chefs made recipes from earlier decades. The annual ICA-calendar, which is handed out in stores at the beginning of the year, of course also had an historical theme, with food from different decades for every month.

The long-running ICA-ad soap also incorporated the 100-year celebrations. Alreday the year’s first film welcomed the anniversary – only that the store employees thought that it was the store owner who turned 100. (“No, ICA turns 100, not me!”)

A little later, at the end of march, store owner ICA-Stig showed how a store keeer always, through-out time, tried to be at the forefront of retailing – even if it meant missing world events. (“Have you seen the moon landing, boss?” “No, but have you seen my cashier line divider?”)

Finally, in Septemer, ICA-Stig welcomed all customers to a national cake party held on 23 September, where all ICA-stores across the country gave away cake and coffee. In total, 900 000 pieces of cake and 1 million cups of coffee were served that day. (Sweden’s total population is 10 million.)

– The cake party is a great example of how an anniversary also helps strengthen the day-to-day business. It sounds big when we say 900 000 pieces of cake and 500 000 ice cream cones. But I think it’s even bigger that we had a 20 per cent increase on sale, compared to the same Saturday a year before, says Malin Eldh, the main project leader for all ICA 100-activities.

“The cake party shows how an anniversary strengthens your daily business. We sold 20% more that Saturday than the same Saturday the year before.” – Malin Eldh, project manager ICA 100.

On ICA’s actual birthday, 22 November, the anniversary year culminated. In the early morning, a small delegation placed a wreath on founder Hakon Swenson’s grave in Västreås. Then followed a larger outdoor event, when the city of Västerås opened its new Hakon Swenson Allé in the center of the city. And the day then closed with a party, just for store owners, that became the talk of the town.

– All material from the anniversary year, including all project plans and pictures that were taken, have now been added to ICA’s archive, so they are there for anyone who, in a few years, want to see what it looked like when ICA celebrated 100 years. Perhaps it’ll be the people in charge of the next big anniversary, smiles Mia Ravnborg, project manager at ICA-handlarnas Förbund.

In addition to these shop owner and customer-focused activities, the Centre for Business History also helped the ICA-organization to arrange four historical food retail seminars, at the Stockholm School of Economics. This was done by commission from the Hakon Swenson Foundation, named after ICA’s founder. At four occasions during 2017, researchers, historians, archivists, cook book writers, gourmet chefs and many more met to talk about the development of food retailing and of society. Each seminar had its own theme: “The food we ate”, “Consumer information”, “Marketing” and “Sustainability”.

Films from the four seminars are available here (in Swedish).

ICA’s historical storytelling during the anniversary year was celebrated by the industry. The magazine ICA HUNDRA #1 won The Swedish Design Award in the category “Customer magazine, print” and the site ica-historien.se won the Publishing Prize in the category “Information sites, professional”.