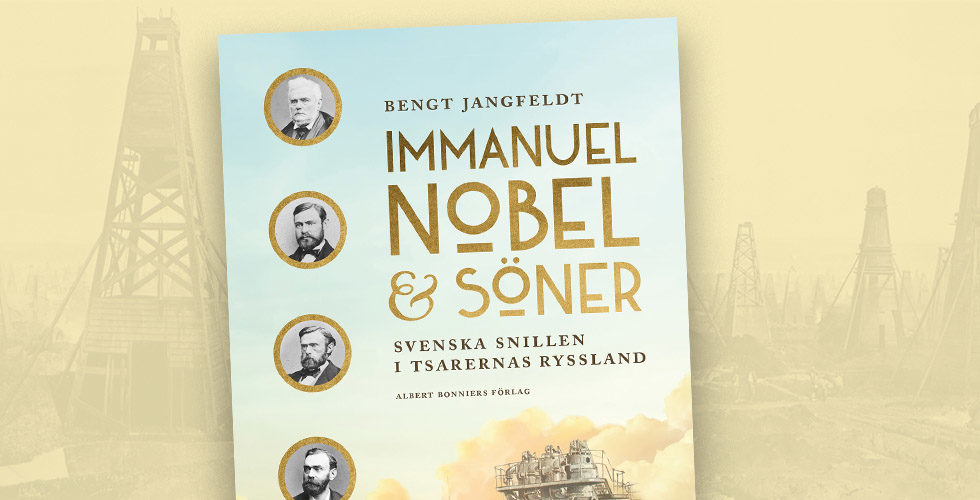 Bengt Jangfeldt tells about the Nobel family’s unknown corporate empire in the new book “Immanuel Nobel & Söner – svenska snillen i tsarernas Ryssland” (loosely translated as “Immanuel Nobel & Sons – Swedish genius in Tsarist Russia”) (Albert Bonniers Förlag, 2020). The book was initiated by us at the Centre for Business History and is the end result of a ten-year international archive project, in which a previously unknown archive from the Nobel brothers’ oil company in Baku plays a central role.

The name Nobel is primarily associated with Alfred Nobel, the founder of the Nobel Prize. Not everyone knows that he belonged to a family of richly gifted people. The whole family’s story is now told by August winner and Russian connoisseur Bengt Jangfeldt in the new book “Immanuel Nobel & Söner” (Albert Bonniers Förlag, 2020), a book created on the initiative of the Center for Business History.

The invention of nitroglycerin as an explosive, later developed into dynamite, was made by Alfred Nobel in close collaboration with his father Immanuel, a universal genius of a kind that no longer exists. Immanuel Nobel built the first pontoon bridge over Skurusundet in Stockholm, designed houses, invented the underwater mine, designed steam engines.

In his footsteps followed not only Alfred but also his brothers Ludvig and Robert. They all grew up in St. Petersburg, where his father ran a mechanical workshop in the 1840s and 1850s. When Alfred moved back to Sweden, the brothers remained. Ludvig ran one of Russia’s most successful machine factories and Robert laid the foundation for the country’s largest oil company. Ludvig’s son Emanuel then developed the Nobel industrial empire into one of the country’s most powerful.

All this disappeared in the storm of the 1917 revolution, when the Nobel family was forced to leave Russia. The name Nobel sank into total oblivion in the newly founded Soviet Union. With the establishment of his award, Alfred Nobel has achieved international fame. The deeds of his father and brothers were at least as remarkable. How ingenuity was distributed in the family “Immanuel Nobel & Sons” is in fact an open question, which this book tries to find the answer to.

The project has been carried out by the Center for Business History and the author Bengt Jangfeldt has reviewed an extensive source material that has not previously been available to researchers. Thousands of letters between family members, newly discovered photographs, drawings and more adorn the lavish book Immanuel Nobel & Sons – Swedish genius in Tsarist Russia.

When the book is now published in collaboration with Albert Bonniers förlag, it marks the end of a documentation project that started ten years ago with the discovery of an archive from the Nobel brothers’ oil company that is still kept intact in Baku, Azerbaijan. Since then, countless archival documents have been digitized, at the initiative of the Center for Business History, in Baku, Tbilisi (Georgia) and St. Petersburg. Peterburg (Russia).

Project team at the Centre for Business History

Order the book online on Bokus, Adlibris or Akademibokhandeln.