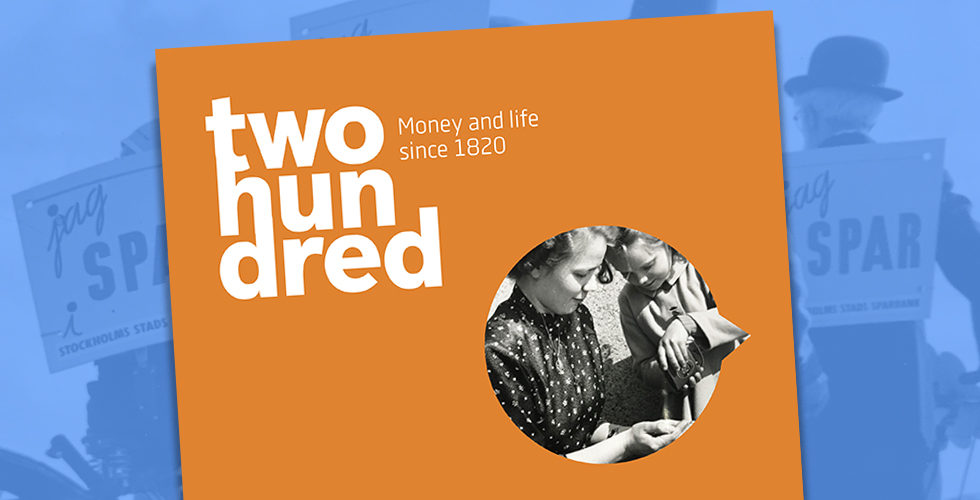 In 1820, Göteborgs Sparbank opened, the first savings bank in Sweden. Today’s banking group Swedbank can trace its origins to that first savings bank – and thus celebrates 200 years in 2020. Few Swedish companies can point to such a long business heritage, a heritage that is also closely connected with the development of the whole country.

This story, all the way from the start in 1820 when Sweden was a poor peasant society on the outskirts of Europe, to today’s banking giant in one of the world’s most modern countries, we tell in the 72-page magazine “TWO HUNDRED – Money and life since 1820″. We have produced the magazine in both Swedish and English together with Swedbank and we based it on research in Swedbank’s archives that we manage for the bank.

The Swedish version of the magazine has been distributed to more than 7,000 Swedbank employees in Sweden and is available at the bank’s branches throughout the country. The English language version will be distributed to the Bank’s employees in the Baltics.

The savings bank idea was based on giving ordinary people a chance to build their own economic prosperity. In 1820, that meant offering banking services that we today take for granted – but which at the time were revolutionary. Two centuries later, many new services have been added, as society has developed – but always with savings as the main focus. At its peak, Sweden had 498 savings banks in 1926. After mergers, the savings banks part of Sweden’s banking sector today consists of Swedbank and almost 60 savings banks.

The magazine tells that story, all the way to the current situation – but places even more emphasis on how society has developed over 200 years and the financial needs that individuals and companies have had, at various times in history, in order build a healthy and sustainable economy.

The magazine’s project team at the Centre for Business History was: