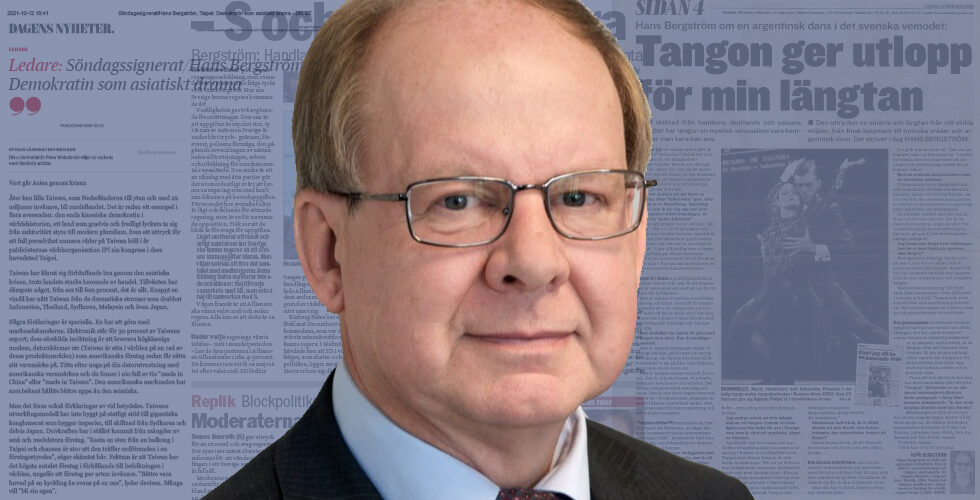 Journalist, political scientist and writer Hans Bergström has been an active voice in the public arena for decades. A new site now presents books, essays, articles and more that Hans has written since the mid-1980s. The site hansbergstrom.se was developed by us at the Centre for Business History, including the collection and digitization of material for this new type of bibliography site.

Hans Bergström, born in 1948, has been a speechwriter for three leaders of the Liberal Party (then “Folkpartiet), editor-in-chief of Nerikes Allehanda and twice editor-in-chief of leading daily Dagens Nyheter. He holds a PhD in political science from the University of Gothenburg. Since 2003, Hans has focus his energy primarily at developing the International English School together with Barbara Bergström.

During his long career, Hans has been a respected voice in the public debate. In addition to editorials and articles, he has written essays, magazine articles and a number of books. The majority of Hans’ production is now available to read on the bibliography site www.hansbergstrom.se.

“When I re-read these texts, it became clear that although some of them are clearly written for the current debate, many of them are about more prevailing topics such as school, law enforcement, healthcare, security, the energy issue, entrepreneurship and governance. The site contains full article texts and links to my b. But then there is a third category: essays for anthologies, anniversary writings and things that are difficult to find but that I imagine can have lasting value, “says Hans Bergström.

Among such essays, which are now made available in full format, Hans counts, for example, “The Ethics of Political Action“, published on the initiative of the Riksdag’s ethics group, and the essay “Ten Points on Liberal Perspectives“, for a seminar in Tällberg organized by Bengt Westerberg. The essay on the proposal to nationalize the school, in an anthology published by the Swedish Teachers’ Association over 10 years ago, is one of the texts that is highly relevant even in today’s political debate.

A new type of bibliography site

The Center for Business History was commissioned by Hans Bergström to collect, digitize and make the material available.

“The collected works of active debaters are often difficult to get an overview of. Their debate posts are often referenced but never fully quoted, and thus easily distorted. Here is now a collection of one person’s texts from several decades of production, for everyone to read and evaluate, “says Anders Sjöman, who project managed the new site at the Center for Business History.

On the site, the texts are grouped by type – books, essays, magazines, daily press and lectures – but it is also possible to free text search across everything that the site contains. All texts are also marked by subject and publisher, which makes it easier if you want to get all texts on, for example, the subject “school” or from a certain newspaper.

“As a digital text archive, the site is a bibliography for our time. We welcome more writers, from all debate perspectives, to do as Hans and collect his works,” says Alexander Husebye, CEO of the Center for Business History.

The project team at the Centre for Business History for the bibliography site was:

The web site was built by Triggerfish.