ICA turns 100 – online, on film and in jubilee magazines 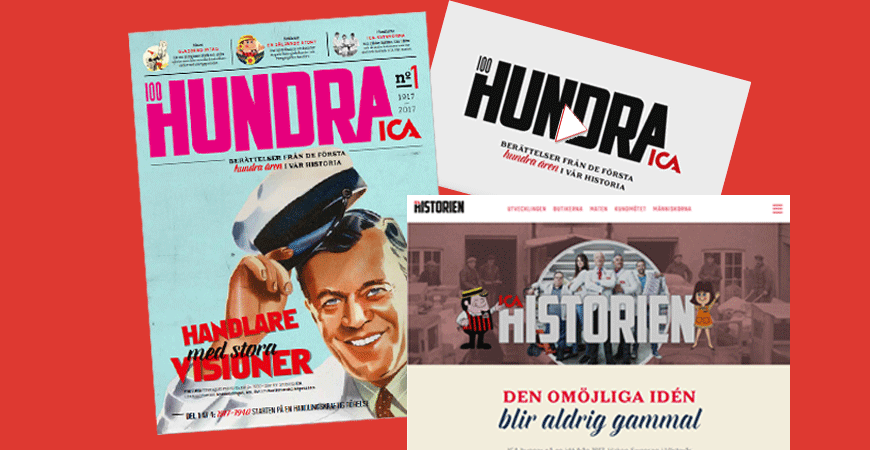 This year, Swedish retail giant turns 100 years. We at the Centre for Business History help ICA celebrate this with four issues of the jubilee magazine ICAHUNDRED, with seven different historical films and by overhauling the historical website ica-historie.sen.  One history, many ways to tell it.

It’s been a century since Hakon Swenson started a wholesale firm – that the clients, the shops it delivered to, were invited to buy a stake in. This idea is what ICA celebrates in all ICA stores in 2017, with the campaign “ICA 100 years – and forward”.  But they also wanted to remind all ICA store owners, who together hold the majority of the central ICA Group, of their joint century long history.  So ICA asked us at the Centre for Business History to find five dominant themes that ran through the 100 years, and to tell that story.

ICA has an inspiring history, that we wanted to tell in as many ways as possible, says Mia Ravnborg, project manager at ICA-handlarnas Förbund.

During 2017, we at the Centre for Business History therefore produce:

In addition, we will also, by assignment from the Hakon Swenson Foundation, hold four industry seminars during 2017.

Project group at the Centre for Business History was:

The project group sketched out ICA’s core story on a Historical Fact Sheet, with verified facts from ICA’s historical archive, which is kept and managed at the Centre for Business History since 2000.

For each product we then enlisted:

For the historical region films:

ICA Sweden is today organized in six regions. For each region’s annual meeting in January 2017, a film with that region’s history was produced.