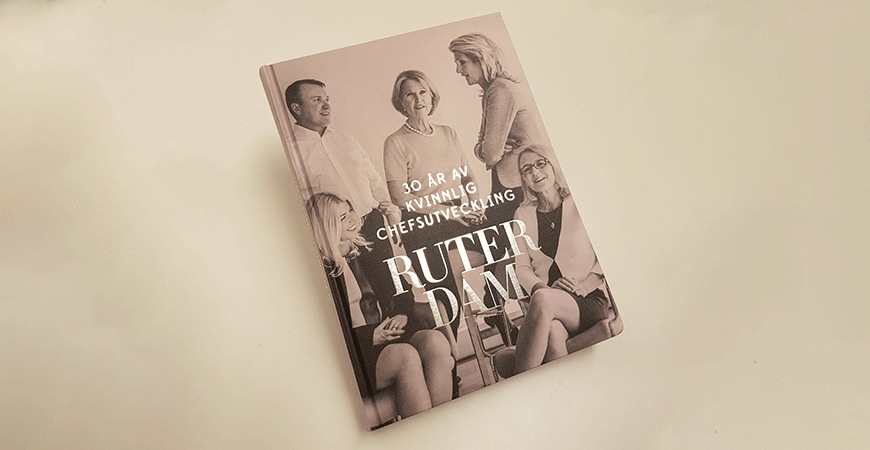 The new book “Ruter Dam, 30 år av kvinnlig chefsutveckling” (loosely translated as “Ruter Dam – 30 years of female management development”) shares the history of the female management development and mentoring program called Ruter Dam. As a result, it shows how gender equality in among large Swedish companies have developed. The book has been produced by Förlaget Näringslivshistoria on behalf of Ruter Dam.

“In 1987, we founded the female leadership development and mentoring program Ruter Dam. Today, 30 years later, I am happy and proud of the fantastic successes of our more than 1,200 participants. between for the top management jobs. “

This is what Gunilla Arhén, CEO and founder of Ruter Dam, writes in the introduction to “Ruter Dam – 30 år av kvinnlig chefsutveckling” (Förlaget Näringslivshistoria). For 30 years, Ruter Dam has worked to get more high-level female leaders in large companies. More than 1,200 women in senior positions in the business world have attended Ruter Dam’s one-year education and have become part of Ruter Dam’s growing business network. They have been given tools to get to even higher positions – and the business community has had even more women to choose from for the top management jobs.

Ruter Dam translates literally into “Queen of Diamonds” – but in Swedish, a women with a lot of “ruter” is also a woman with a lot of energy, power and self-confidence. In this anniversary book you will meet “diamonds ladies” from 1987 to today. You will also meet the business leaders – mostly male – who have supported their development. It will be a summary of how working life has changed over three decades, told by the women and business leaders who have been involved.

The book is published by Förlaget Näringslivshistoria. Project group at the Center for Business History has been:

Bea Hellman was hired to design the book.

an example of:
Business History PublishingUsers of history