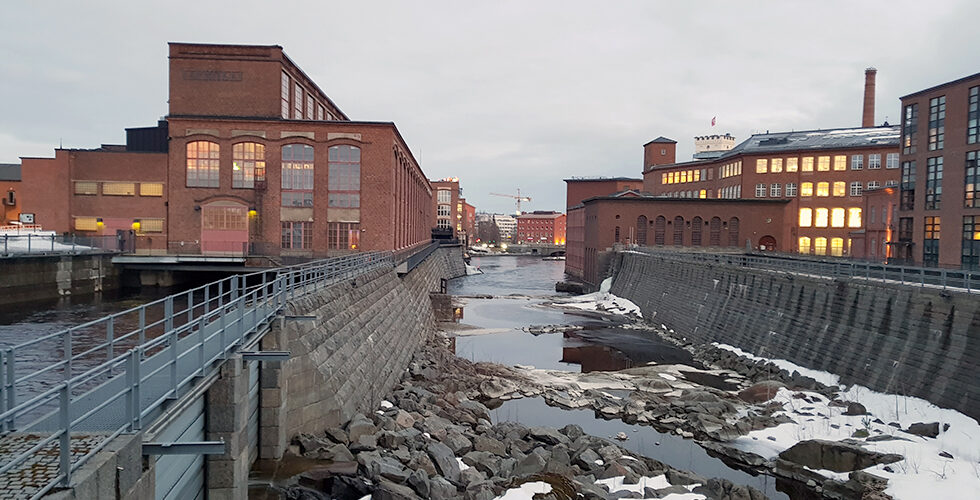 The Nordic-Baltic research network Nordic Industrial Heritage Culture in the 2020s, funded by NOS-HS, organized the second in a series of three workshops in Tampere/Tammerfors, Finland, under the theme: Citizens, societies, and memory organizations, March 24-26 2022.

Tampere is undeniably a suitable setting for discussing the contemporary relevance of industrial heritage. ”Finland’s Manchester” was founded in 1779 to take advantage of the Tammerkoski rapids for industrial purposes. Next to the rapids, the Scotsman James Finlayson set up a cotton spinning mill in 1820, which was to become Finland’s first large-scale industry. In the 1850s, industrialization gained speed: textile factories, machine shops and metal industries, but also shoe factories and paper mills, were established along the water. Around the factories in the heart of the city, Tampere grew to become one of Finland’s largest cities – and as an industrial city the most prominent of all.

Today, central Tampere is still dominated by well-preserved industrial buildings from different eras, most of them in red brick and with no less than 25 remaining factory chimneys, reminiscent of the industrial heyday. One of the factories, a paper mill belonging to the forest industry group UPM, is still in operation, but many have in recent decades been reused for offices, homes, cafes, restaurants and small businesses.

The city tends to its industrial and workers’ heritage and in some of the old factory buildings there are today industrial museums and working life museums, but also, as a mark of a new era in business, the Finnish Games and Gaming Museum. The premises of the former mechanical engineering company Tampella (1861-1990), where locomotives and paper machines were once manufactured, have been converted into the Vapriikki culture and museum complex. This was the fitting environment in which the Nordic Industrial Heritage Culture in the 2020s network organized its workshop.

The program had been planned by Johanna Björkman at the Helsinki City Museum and Pia Olsson at the University of Helsinki, together with project manager Susanna Fellman at the University of Gothenburg. The first day of the workshop was devoted to internal presentations within the research network, while day two was planned as a public seminar. The focus during day one was on comparisons between the various Nordic and Baltic countries in terms of listing, conservation measures and forms of protection for industrial buildings and the built environment. The first presenter was Eva Dahlström Rittsél at the Swedish National Heritage Board, followed by Anke Loska and Maria Samudrika Lytomt from the Norwegian National Heritage Board. Following these Swedish and Norwegian presentations, Anita Anteniske from the Industrial Heritage Trust of Latvia spoke about the preservation of industrial heritage in Latvia.

Henry Kuningas from the Tallinn Urban Planning Department and the Estonian Academy of Arts discussed the relationship between industrial heritage and property transformation in Tallinn. After that, Marija Dremaite from the University of Vilnius spoke about industrial heritage projects and conservation in Lithuania, and about the development of international collaborations on academic courses and research on industrial heritage in the Nordic-Baltic countries. Last in the line of insights into the ongoing work in different countries came Dag Avango from Luleå University of Technology, who presented current research projects from a Swedish and international perspective. All in all, the day gave a picture of the changing conditions that make their mark on the work in the various Nordic-Baltic countries – countries that share a strong sense of cultural affinity but at the same time carry such different historical experiences.

Day two of the workshop consisted of a well-attended public seminar in the Vapriikki Auditorium, under the heading Industrial Heritage, Everyday Life and Participation. The point of departure was the industrial and economic changes taking place at the end of the 20th century and the beginning of the 21st century, and the impact of this transition on local communities as well as people’s lives and livelihoods. What role does traditional industrial heritage play in this process, and how is it understood by people today? Susanna Fellman and Anna Lyyra-Seppänen, director of the Regional Museum in Pirkanmaa, welcomed the participants and handed over to the moderators Pia Olsson and Johanna Björkman.

First among the speakers was Tanja Vahtikari at the University of Tampere, who discussed issues of involvement and participation in cultural heritage processes in a broad sense, based on current research. In the following presentation, Torgeir Rinke Bangstad from The Arctic University of Norway in Tromsø weaved together ecology and industrial heritage to understand the traces of industrial activity in the Anthropocene age. Tiina Äikäs at the University of Oulu spoke in her presentation about a collection and research project, where factory chimneys reminiscent of previous activities have formed the basis for memorial stories, but which also analyzes the chimneys as monuments and elements in the contemporary city.

Teemu Ahola from the host institution, Museum Center Vapriikki, gave an overview of Tampere’s development as an industrial city but also of the efforts to convey this historical heritage in the exhibitions at the city’s industrial museum. The two concluding presentations were both based on companies and their use of history – albeit with different points of departure. In his presentation, Anders Houltz at the Center for Business History in Stockholm discussed the ways in which companies at different times have related to their own corporate heritage through a distinction between Fordist and post-Fordist views of history – where the former represents a linear understanding of cultural heritage and the latter a more contemporary one.

Pia Olsson at the University of Helsinki, finally, discussed contemporary corporate storytelling based on the historical websites of selected Finnish companies. What do companies choose to highlight as significant in their heritage – and, conversely, what do they choose to exclude? In conclusion, the various presentations during the day showed how memory institutions and the general public as well as companies actively contribute to shaping and maintaining the industrial cultural heritage – but their commitment is based on different premises and motives, and they tend to fill the heritage with varying content and associations.

This was the second of three workshops organized by the Nordic Industrial Heritage Culture in the 2020s network. The first took place in Horsens, Denmark, in November 2021 and the third and final will take place in Gothenburg in the autumn of 2022.